my life in Avalon ….

First impression can only be described with one “word”; WOW!!!

So Microsoft unveiled how they are planning to change the world. Why such a big statement? Am I exaggerating? I believe I am not. We live in a world of desktops and laptops today; yea we see some tablets that introduce touch but is it mainstream? are there a replacement to your desktop/laptop? I guess the answer is, No it is not, in order to do such a radical change you need to “push” hardware manufactures into producing these devices mainstream. mmm I wonder who could be that company that can have such an influence? By committing to touch and in fact developing Windows as a touch-first operating system, Microsoft will drive hardware manufactures to give us the touch devices and change how we interact with software today. And yes this is what has been announced at BUILD.

What does touch mean to us? We need to change our way of looking at software, it will not be OK to just have buttons and textboxes; it will not be ok to press a button and your app stalls. Touch is a much more direct way for a user to interact with your application and if one disregards this then that application is destined for failure. I really enjoyed the keynote session from Jensen Harris. He talked about the user experience and how us developers have to embrace the new ideas and concepts coming with Metro style apps. He talked about how Windows 8 is alive, how Windows 8 is personal. These 2 factors create (and yes you might think I am crazy but still I will say it) an intimate relation between you and your device. Windows 8 gives you that “home” \ “friend” sort of feel.

Jensen also made a very good point about apps. Without apps what is Windows 8? without apps there would be no tiles, no tiles empty OS. Even when you look at Metro style apps, you can see how Windows is all about apps… Apps are now chrome-less, your app uses the stage that Windows 8 provides; your app is now the centre of attraction. Windows 8 will also introduce an App Store, this will make your application easier to be discovered and installed by users. App store is probably one of the biggest opportunities for us developers because it gives us a reach of millions of people that will be running Windows 8.

This is all awesome, but let’s not miss the number 1. Its a new OS and with Windows 8 besides many new features (and yes there are many), new concepts are born. Features are very important but concepts are what really change how Windows 8 differentiate itself from other OSs.

One of the concepts Windows 8 brings is Contracts. These are different ways how you application can contribute to Windows; its a way how Windows opens up and let third party applications interact with each other. Some examples of contracts are the Picker contract, Search contract and Share contract.

Picker Contract is a way how you can register your app with Windows and start exposing your data to other applications to consume.

Share Contract is a way how you can share a piece of information from your application to another application. The application exposing the info would be the source and the application consuming the info would be the target. Imagine the share contract (which is a charm just like search contract) as a sophisticated clipboard. So for example let’s say you are in Paint and you draw something, if paint implements the source share contract it can expose the image you drew. The user can then click the Share charm and all apps that implement the target Share contract can use that data. Just like the screen shot below.

My personal favourites are the share and the picker because those 2 just add so much to Windows applications…. With these charms we can have applications that reuse each other and that can efficiently interact which each other seamlessly.

Besides these there are tons and tones of other features, not to mention tiles, notifications, surprisingly enough keyboard shortcuts, and many more…

Last but not least what about us developers? What is this new Windows Runtime everyone is talking about?
Well in this blog post I will not do a deep dive but here is a summary. Windows Runtime (or as they call it WinRT). WinRT is the API for Windows Metro Style application (aka Immersive apps). WinRT will support

HTML (with some custom attributes) UI definition
– with Javascript 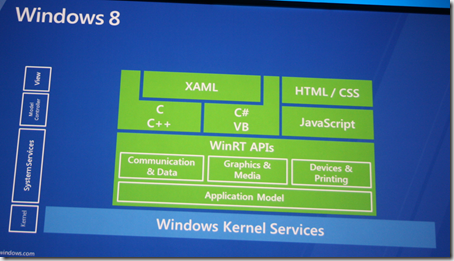 WinRT is written in native code but it exposes the API with metadata files (under C:\windows\system32\WinMetadata) which is very similar to MSIL (in fact you can open these files in ILDASM) so that it can project the APIs to the other languages i.e. JS, C# and C++. Each language has a different runtime so C# still has a CLR running and JS has a runtime that I forgot its name, I think its WinJS

You can also expose libraries to WinRT so that they can be consumed by another language (there is a new output type just like Class library but called MD library). For example you write a library in C++ and it can be consumed by C# or vice versa (or even JS). There are some rules for doing this such as collections must be of type IList<T> (in C#) etc…

WinRT is all about performance and making apps “fast and fluid”. In fact most of the WinRT API are expose Async. WinRT does not use GDI, it only uses DirectX for rendering.

All in all WinRT is something impressive, its what we UI developers where waiting for to build the next generation of applications… I will deep dive in WinRT very soon so stay tuned

So what is really coming at out?? its not just another version of Windows, Its new hardware, New way of interacting with devices, a whole new set of amazing apps. For me, yes, that is enough to say, Windows 8 changes everything!